Testing for Lyme Disease in Dogs

What is Lyme disease? How does my dog get infected? 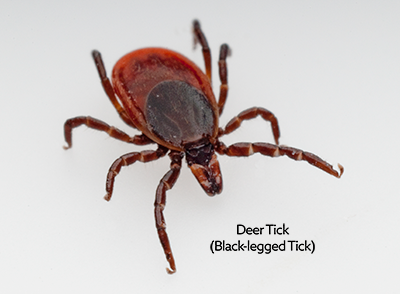 Lyme disease is an infectious disease caused by bacteria called Borrelia. The bacteria are most commonly carried by the deer tick (also known as the black-legged tick). Infection occurs when a dog is bitten by an infected tick. It appears that the disease is not transmitted until the tick has fed for approximately 12 hours. The tick itself becomes infected by feeding on infected mice, birds, deer, and other animals.

Where is Lyme disease found?

In the United States, Lyme disease has been reported in every state, but over 95% of cases are from the Northeastern, Mid-Atlantic, and upper Midwestern states, with a small number of cases reported along the West Coast, especially Northern California. In Canada, Lyme-positive dogs are found mostly in southern Ontario and southern Manitoba, with a small number of cases in southern Quebec and the Maritime provinces.

Can infection be spread directly from one dog to another dog or from my dog to my family?

Direct spread of Lyme disease from one dog to another dog has not been reported, even when infected and uninfected dogs have lived together for long periods.

Spread of Lyme disease from dogs to people has not been reported either, but people are equally at risk for Lyme disease if they are bitten by an infected tick.

How is Lyme disease diagnosed?

The C6 test is a preliminary blood test that detects antibodies against a very specific protein called C6. This protein is unique to the Borrelia bacteria, and the presence of antibodies to C6 suggests exposure to Borrelia and infection. The C6 antibodies can be detected as soon as four weeks after a dog is bitten by an infected tick, and may be found in the blood stream even before the dog shows signs of illness. The C6 test is often offered as part of a special test kit that looks for other tick-borne diseases. The test can be done by your veterinarian in-clinic or the blood sample can be sent to an outside laboratory for testing.

If the C6 test is positive, what is the next step?

A positive C6 test means antibodies to C6 were found. The next step is to do a QC6 test, which determines if the levels of antibody are high enough to justify treatment. If the value of the QC6 is higher than 30 IU/mL and signs of illness are present, then antibiotic treatment should be considered. If the QC6 is less than 30 IU/mL and there are no signs of illness, then treatment may not be necessary.

If my dog tests positive, does he need to be treated?

The decision to treat Lyme disease is somewhat controversial since many infected dogs show no signs of illness. Factors that would support treatment include:

How can I tell if treatment is working?

If joint lameness is the presenting sign, improvement may be noted after 3-5 days starting antibiotics. A dog's response to therapy can be assessed by repeating the QC6 test six months after treatment is complete. Dogs that start with a moderate to high QC6 value typically show a 50% reduction or more in the QC6 at six months, indicating that treatment has been successful. Dogs that have a lower initial QC6 value may not show such dramatic reductions in the QC6 at six months, although the value should still be lower than the starting point if treatment has been successful.

A persistently high QC6 suggests treatment may not have been complete or that the dog became reinfected after treatment was stopped.

© Copyright 2018 LifeLearn Inc. Used and/or modified with permission under license.